Marco Boscarato, born on 24 April 1967 in Mirano (Venice), was raised in a family with a strong culinary tradition, which run for over 50 years the famous Trattoriadall’Amelia in Mestre (Venezia), renowned for its fish and seafood dishes.

From a young age, Marco showed a deep interest for cooking, a passion which he further developed during his studies at the University of Venice, first in Business Economics and later in Modern History. He graduated with a master thesis on the arrival and diffusion of beans in Italy and in the Veneto region in the first half of the 16th century.

His interest for organic and biodynamic farming led him to focus especially on vegetarian and vegan cuisine. After attending several workshop and courses on organic food and agriculture and after cooperating with several local organic farms, Marco opened together with his wife Alessia the Casa La Buona Stella, a small restaurant on the Montello hill, near Treviso.

At the Casa La Buona Stella Marco and Alessia serve mainly vegan dishes and a selection of local cheese and meat. Almost all the vegetables used in their dishes are grown organically in the restaurant’s vegetable garden. The Casa la Buona Stella is not only a place where to eat but also a cultural meeting point, hosting different events ranging from history to poetry to anthroposophy. 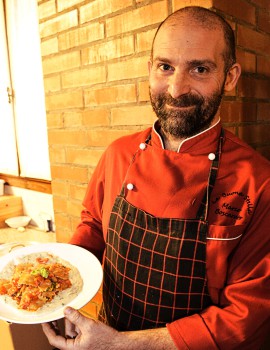